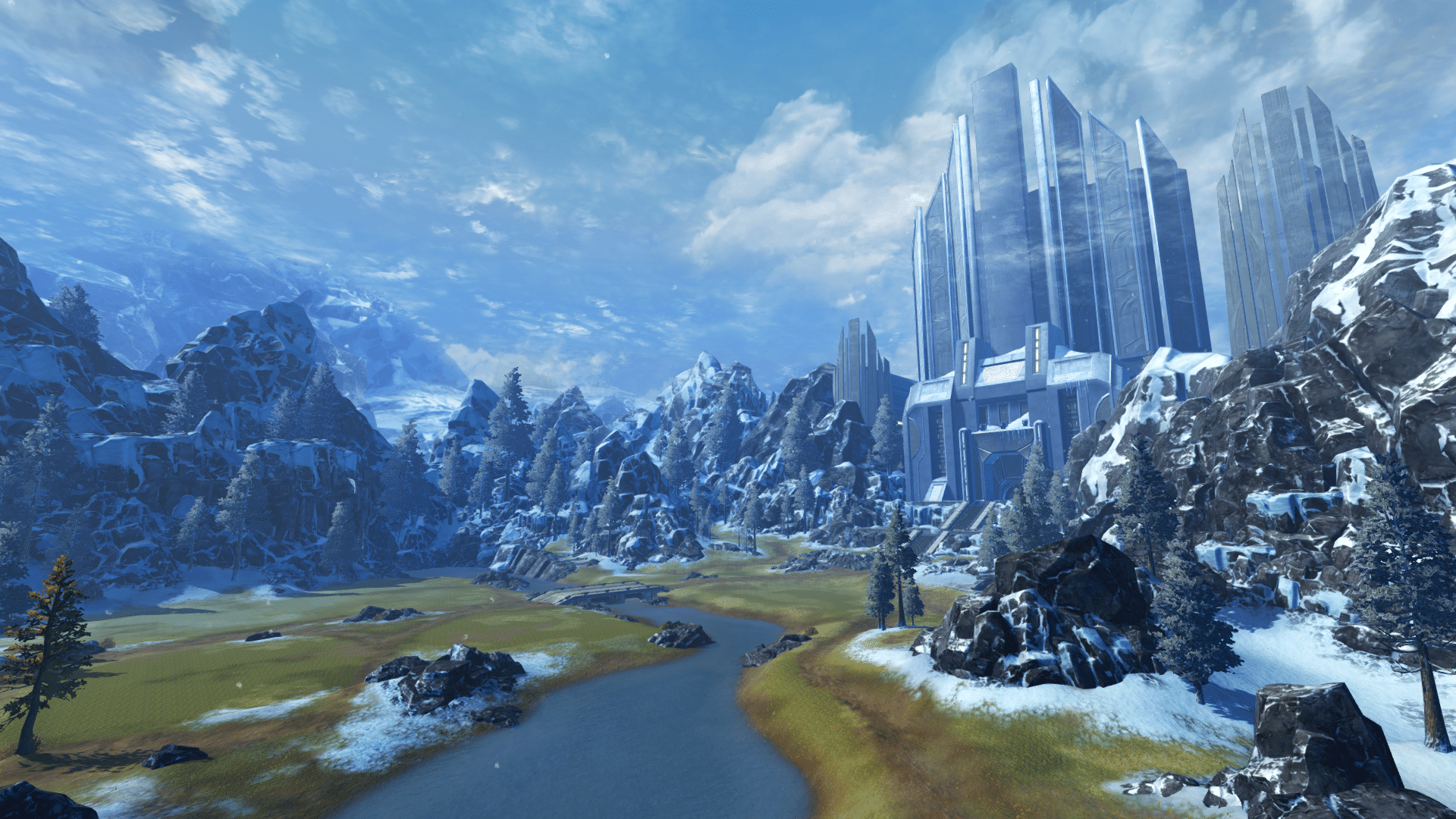 The upcoming Alderaan Noble Estate Stronghold is looking magical so far! Here is my feedback for the developers and my initial impressions of the Stronghold.

This is the same feedback I have provided on the forums. However here, I include screenshots and videos to illustrate my points. Here’s the link to my feedback on the forums – http://www.swtor.com/community/showthread.php?p=9807210#post9807210

What is your general feeling on the Stronghold?

I really like this stronghold overall. It really captures the thematic elements of Alderaan beautifully. The mountains, the snow, green fields, the waterfalls and stream. The building structures themselves are also really nice. The detail in the interiors is impeccable especially the windows (stained glass or otherwise). I also like that you can climb up some of the mountains and there hidden little nooks and crannies to explore.

I’m not a big fan of the Killik cave. Maybe if it were further away from the main building I wouldn’t mind it but it just doesn’t look right having the Killik Mounds so close to the main building. I do like the idea that someone else suggested of removing all the Killik stuff from the cave including the yellow mounds on top. Instead, you could turn those elements into decorations (that aren’t already decorations) and those who want to have a Killik cave can make it a Killik cave with decorations. This way players can use the cave how they see fit.

I also like the idea that someone suggested of giving the Noble Interior adjacent rooms (ie. the Study, Drawing Room, Guest Chambers) their own personality. This could be done by making one or two of the rooms bigger, varying the shape of the rooms or even adding windows to one or two of them. I do recall Organa Castle having some nice circular type rooms as seen in the Smuggler, Jedi Knight and Sith Warrior stories.

I don’t really know how I feel about the Throne Room. I like the concept but I feel the execution is a little underwhelming. This is probably because the room is quite small for a Throne Room. I don’t really like the placement of the throne structure. Yes, it looks really nice but honestly, I’d rather have a full window to take advantage of the beautiful waterfall views. Maybe if it were bigger, had a high ceiling and columns or something to make it feel grander or throne ‘roomy’ I’d like it more.

The grand interior room with the stained glass window is quite lovely. However, I would like to see the upper area/roof either turned into a balcony area or even windows added (not stained glass, just normal windows like those in the Retreat). There isn’t really that much point to having large wall hooks that high up especially when your eye is drawn straight to the stained glass window. Maybe if we had some kind of window decorations I wouldn’t mind it as much.

Does the Stronghold feel too big? Too small? Why?

I think the size of the Stronghold is just fine in terms of scale. I would expect a Stronghold on Alderaan to be large. It doesn’t need to be any bigger than it is though. I would honestly be disappointed if it was a small Coruscant/Drommund Kaas sized Stronghold. There are plenty of other planets where a small Stronghold would work. It would not work on Alderaan.

If you could change one thing about the Stronghold, what would it be?

Add a training dummy room (similar to the one in the Rishi Stronghold)! Put it where that fake door is in the Retreat perhaps? This Stronghold is probably going to be highly desirable as a Guild Stronghold. It would make sense to add the utility and convenience of a training dummy to this stronghold especially if you guys can’t increase the cap on Guild strongholds.

Does the increased hook density feel too cluttered?

Not really? Though hooks are quite sparse in the open field area at the front entrance of the stronghold. The interiors are overall well done in terms of hook placement but could use some minor tweaks. Having a lot of hooks in the interiors gives players plenty of decorating options.

The main tweaks I’d like to see include adding ceiling hooks to the lower ceiling areas in the stained glass window room. I’d also like to see hooks added to the floor of the ruins. It’s also a little bizarre that the front entrance doesn’t have hooks either.

Does the number and placement of hooks feel too restrictive given the Stronghold’s decoration cap?

Anything else you want to add?

First of all, can we please please please get some stained glass window decorations?! You could do scenes from a variety of planets too. Maybe do some more Alderaan ones. A waterfall, some ruins or just snowy mountains and forest. A Tatooine stained glass window with the twin suns setting would be incredible! A Voss one would like amazing too, Rishi, Yavin, Hoth, Tython or some underwater ones inspired by Manaan. There are so many possibilities!

If doors serve no purpose ie. don’t open up to anywhere, then they should be removed. There are a couple of fake doors in the Retreat (see below images) that should be removed or lead to some additional rooms (preferably the latter).

If possible, I would also like to see a small PvP area added to this Stronghold. It could be out of the way so those who aren’t interested in PvP feel no need to enter or otherwise utilise the space (unlike in the Rishi Stronghold where the spaces are front and centre). I’ve even found a nice location for it. There is a nice hidden area up in the mountains you can climb to by the waterfall in the front area of the stronghold. It would need to be flattened a bit and some hooks placed up there but I think it could make a nice little, out-of-the-way duelling space. At the very least, some hooks should be added to this area.

Something else that bothers me is the placement of rugs and ceiling lights that are part of the Stronghold and cannot be removed. I would prefer to see these removed especially the rug in the Throne Room. Players should be able to choose what rug or rugs they use in that space.

Slightly unrelated but, I would like to see more tree, bush, plant, hedge and flower decorations (without the damn pots) too! This would be the perfect stronghold for them.

Alderaan Noble Estate has a really relaxing, serene feel to it. It has plenty of potential for players and guilds to craft their own spaces and utilise the Stonghold in a variety of ways.

This Stronghold does somewhat closely envision what I had hoped an Alderaan Stronghold would be like. The only major difference is that I was hoping for a full-on castle modelled after House Organa, Panteer or Thul’s with multiple floors, balconies and a variety of rooms. But I do appreciate that it may not quite fit lore-wise and having a Noble’s Estate instead does make more sense. I would still like to see the interior spaces with more rooms of varying sizes.

The only major criticism I have is that it almost has the same issue as the Manaan Stronghold has. A lot of potential unused building space. There seems to be a lot of areas that could be more rooms that are only partially utilised as such. It is not as big an issue with Alderaan because there are so many spaces already and they are well utilised but you can see that there is space for more. You’re just seeing these large buildings and the interior rooms that we get are quite minimal compared to the potential space. It is especially obvious when you travel from the Estate Interior to the Mountain Retreat area and look back.

What the developers have come up with is excellent nonetheless and I look forward to seeing what happens in the PTS testing cycle in January.

The Alderaan Nobles Estate will be back on the PTS in January. I look forward to further testing of this Stronghold!